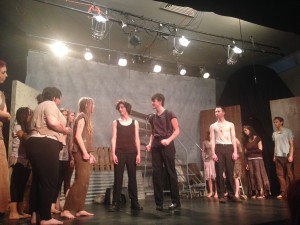 For the past 3 months, everyday in afterschool clubs, Walden students have been hard at work memorizing lines and rehearsing their parts for the production of Animal Farm. Not only did they learn their parts, they also sang, as there were several musical numbers!  More than 20 students performed under the instruction of directors Gwen Dutcher and Mike Morrell.  The play was put on at the Echo Theater in downtown Provo.  The entire high school had the privilege of watching the play during school on Wednesday and loved being able to see all of the talented Walden actors.